As our new Director, Minhyong Kim, arrives in Edinburgh to start his term of office we took the opportunity to ask a few questions to find out about him, his mathematics and his plans for ICMS. 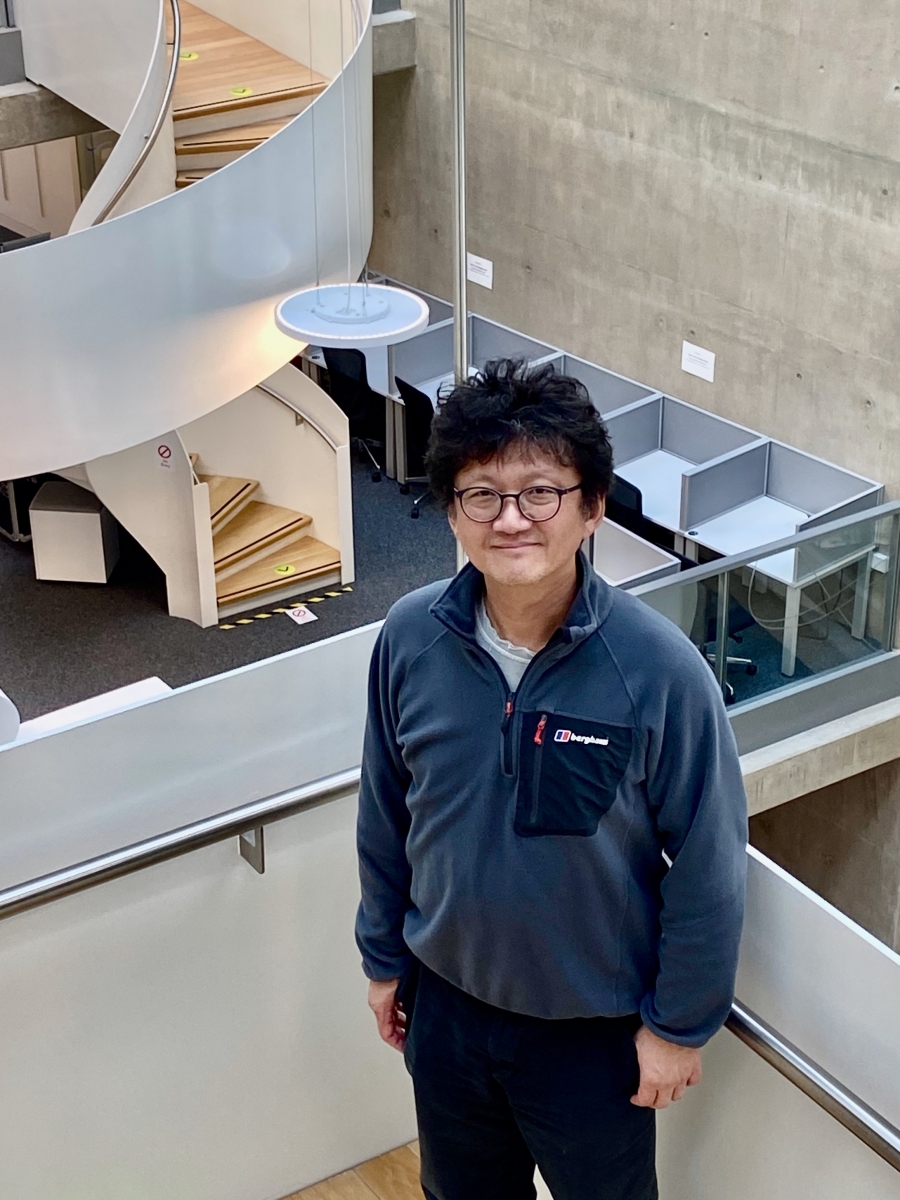 ICMS: Can we start by asking about your mathematical background: where did you study and where have you worked?
Minhyong KIm: I did my undergraduate degree at Seoul National University and my Ph.D. at Yale University. I’ve been on the academic faculty at quite a few places around the world, which I list since I like to think it does give me a kind of broad knowledge of the different ways in which institutions can function: M.I.T., Columbia, Arizona, The Korea Institute for Advanced Study, Purdue, UCL, Pohang University of Science and Technology, Oxford, Ewha Womans University, and Warwick. I’ve also been a visiting professor at universities in Canada, Japan, France, and Germany.

What is your own area of mathematical research?
Most of my work has been in arithmetic geometry, a subject area that brings together possibly the most ancient streams of investigation in all of mathematics. There is a folklore description of mathematics as the study of numbers and figures. In the 20th century, people came to realise that there is a kind of 'duality' between geometry and algebra, since functions on a shape can be added and multiplied in a way that encodes the information about the shape. In arithmetic geometry, we take the algebraic structure to be as simple as possible in that they are absolutely finitely-generated, i.e., consisting of the integers and typically just a few more numbers as basic seeds. Arithmetic geometry constructs and studies a geometry dual to such a number system and brings thereby the interaction between geometry and algebra to its most fundamental level. The study of arithmetic geometry has put me in touch in all kinds of ways with number theory, analysis, topology, algebra, and mathematical physics. This complexity is certainly among the great charms of the subject area.

We are so pleased that you are to be our first full-time Director, can you tell us what attracted you to this role at ICMS?
It’s a great honour and pleasure to be here! Perhaps I can quote my friend Tudor Dimofte, who first wrote to me urging me to apply for the position. He told me it seemed right for me because I was ‘good at bringing people together’. I hope this is true. It’s certainly something I greatly enjoy. I have quite a bit of experience organizing conferences, schools, and workshops at many places in the world. So I guess I was attracted by the idea of making some kind of a contribution by facilitating events that are timely and representative of the evolving needs of the mathematical community as a whole, but also original and surprising.

What are you most looking forward to as Director of ICMS?
It has to be the prospect of meeting all kinds of mathematicians and scientists from around the UK and the world on a regular basis and learning something about the forefront of research, knowledge exchange, and communication. This will include old friends and energetic young people from whom I hope to get inspiration for mathematics and life.

What do you think is the most important thing that ICMS can do for the UK Mathematical Sciences community?
I’ve taken to heart my predecessor Paul Glendinning’s advice that the ICMS should strive to be an excellent enabler. As I understand it this means being attuned to as broad a range of needs in the community as possible and responding to them in a constructive fashion. Most mathematicians work on a day-to-day basis in structures that come with many duties that inhibit possibilities for exploring new directions of research, new interactions, and new conversations. The ICMS must indeed enable them to do these things that are quite hard if not impossible to fit into the regular university agendas. To put it in slightly old-fashioned terms, I believe we are here to serve the community. I might remark that this will also mean ‘serving by leading’ often enough, which is also important to keep in mind.

A large part of what we do at ICMS are our week-long research workshops, what do you enjoy about attending a workshop?
Obviously, learning new things and having an opportunity to ask people questions about their research. As we all know, coming to an understanding of new mathematical ideas is hard no matter how many years one works in the subject. The primary function of workshops is to help us discuss difficulties with others and listen to people explain their theories first-hand, thereby enabling us to learn and innovate efficiently. Since I’ve always been a big fan of learning via conversation, workshops are the perfect events for me. I hope the ICMS can help others to have fulfilling experiences of this nature.

At ICMS there is a strong focus on knowledge exchange, which allows us to work with industry and business to help find solutions to challenges using mathematics, why do you think KE is important?
The most obvious answer is that advanced mathematics is already woven into the fabric of the modern world at the level of fundamental science as well as technology, information, and organisational structure. As mathematicians, we should consider it our duty to make ourselves available to scientists, for sure, but also to all sectors of society that need our expertise, from communication to logistics to climate, even when the awareness of this need is not entirely out on the surface. One issue I'm especially interested in is encouraging people who might traditionally be regarded as 'pure' mathematicians to engage broadly with the world. Even in my own lifetime the applicability of 'abstract' ideas has increased enormously. For the future, a good distribution of mathematicians equipped with diverse and deep conceptual tools and an adaptable intellectual outlook will be essential to creating a harmonious network of theory and application that can continue to make genuine contributions to human well-being.

Can we ask you about increasing diversity in mathematics? Have you any thoughts on this that you’d like to share?
Clearly, we need effort and organization at many different levels including all the different levels of education and within the professional community. It’s not a problem that can be addressed by just a few institutions or sectors of society, tying in as it does to numerous complex structures in politics, economy, sociology, and so on. We need to do our part, but we also need to make ourselves aware of the bigger picture so that the different remedies can be made coherent and collaborative. One encouraging view I’ve heard from several people is that the ICMS is better equipped than most institutions to address some of the difficulties, for example, by ensuring diversity in the beneficiaries of our support. This of course applies to people who put in proposals for workshops etc, but also to the whole range of participants in our events. I have a lot to learn about what the key issues are and how to make our efforts more effective. I look forward to making myself more knowledgeable and helpful over the coming months.

You are known for your passion for public engagement, can we ask why you think public engagement is important?
Firstly, I should admit that my forays into engagement are primarily for my own fun. There are few things as enjoyable as introducing mathematical ideas to people have not had the opportunity to engage with them or being able to present them to people in a way that’s likely to be new to them. Whether the audience is young or old, it’s a great moment when you get to witness a moment of enlightenment, when people respond with eyes, comments, or questions that say they are gaining genuine new insights. That part of the mathematical experience somewhat resembles a magic trick, albeit of a deep and fundamental sort. As for social function, I’m sure that is also important. It seems to me that the importance of mathematics is pretty much universally recognised and most people just wish the ideas were more accessible. It’s great fun and hopefully useful to attempt to help them along. Maybe there is one point worth making: my impression is that most people are respectful of mathematics as an intellectual tradition, as a remarkable tool for understanding the world, and for coming up with technological innovations. However, if mathematicians approach others in a high-handed fashion, I think it can lead to negativity and maybe even skepticism. How to strike the right ‘communicative balance’ is an interesting challenge, which many mathematicians are trying to meet.

Who is your favourite mathematician and why?
It’s probably Pythagoras. I’m referring roughly to the mythological one since we have very little knowledge about his actual life. I think the ‘Pythagorean theorem’ is the most important discovery in the history of science, given its consequences for geometry, measurement, general relativity, data science, and too many other areas of science and technology to list. This may sound outlandish to some people, but I think his theory of harmony and the subsequent intuition that the world is made of numbers was the first inkling of quantum mechanics in history. It’s common to think of Democritus as the originator of the idea of ‘atoms’, but there is a deep sense in which the honour should actually go to Pythagoras. Pythagoras is also a great representative of scientific and cultural diversity. His ethnicity is quite hard to figure out. It’s clear that Samos, where he was said to have been born, was a very diverse place indeed, and it’s quite likely that his father was from the Levant. Pythagoras studied all around the Mediterranean, in Syria, Babylon, Egypt, and was said to have studied even with philosophers from India. One might speculate that this complex current of influence was what enabled his incredible insights.

If you could solve one great maths problem what would it be?
I’d like to figure out what space and time are made of. (I know this sounds crazy, but hey.)

What is so special about Edinburgh and ICMS?
Obviously, there are opportunities for such activities in many parts of the world. However, among the well-established venues within Europe and North America, I genuinely believe the ICMS provides the most interesting environment. We are now located on the top floor of the Bayes Centre in the city centre. Edinburgh is a fantastic city within a stone’s throw of the sea and the hills. There is easy access to coastal towns with great seafood dining, beach walks, and boats to seabird sanctuaries.

Edinburgh a beautiful old town, one of the most interesting cathedrals in Europe, wonderful art galleries, and monuments to great intellectuals of the enlightenment such as David Hume and Adam Smith, all within easy walking distance. We have just rented space in the James Clerk Maxwell birthplace, a beautiful Georgian building where the greatest scientist of the 19th century was born, wherein visitors for the Research-in-Groups programmes will have their workspace. I will be advertising in the coming months other immersions and diversions that will form an integral part of the ICMS experience.

What do you like to do when you aren’t thinking about maths? (if you don’t mind us asking !)
Hmm…I like to watch animal videos. Does that count?

It certainly does! We all enjoy watching animal videos.