The Modelling Camp Aims to:

Participation in a modelling camp is excellent preparation for Study Groups. European Study Groups with Industry are events across Europe. There is an annual ESGI in the UK.

The ICMS/MAC MIGS Modelling Camp is structured to maximise time for networking and informal discussions. We will use a mixture of online platforms (Zoom/Sococo/Slack) to hold this event. This mix of tools has been chosen to maximise team working.

MAC-MIGS and MI Industry Stream students will be send a separate link to register.

Applications are now closed.  Emails will be issued on 11 May, to all applicants.

2021 Problem Challenges are a mix of problems from MAC MIGS Industral partners and Modelling Camp academic partners.  Each problem will have an assigned problem lead. Further problems are planned and will be added to the website in due course.

Brainnwave work with many companies in the energy industry that are trying to reduce their carbon impact using innovative technology. During many processes in natural oil processing, excess gases that are deemed too expensive to store are simply burned off in a process known as gas flaring. By identifying gas flaring locations and volumes using independent data sources, companies can be provided with information on where to target for the optimal results. This project focuses on creating an automated method to identify flaring locations for satellite data, and approximating the volume of gas burned over a given time period.

Intercropping - growing two or more crops together - is a farming practice that can improve agricultural sustainability by reducing reliance on agrochemical inputs and increasing agrobiodiversity.
Harvesting and separation of grain crops grown as intercrops is a common challenge faced by farmers, in particular, threshed seed needs to be cleaned and separated into the different seed types. This project focuses on solutions for seed sorting and separation with multiple possible approaches from analysing images of harvested grain to the dynamics of seed movement through sieves.

Trace metals in rivers and oceans are in a continual state of flux driven by physical processes. Their concentration through uptake in organisms reflects their presence in the environment and could provide crucial management information for marine resources by illuminating their life history and use of the environment. However how such elements are mobilised and become available to be taken up by animals is poorly quantified as a system. This project aims to model the supply side of this system based on the input of pertinent environmental monitoring data, which will be made available during the project. It will integrate diverse data sources to predict the routes of trace metal delivery and their concentration at the river mouth over the data time period. There are a number of potential approaches from traditional modelling and statistics to data-science methods.

The Discrete Element Methodology (DEM) models granular material behaviour based on inter-particle interactions. It is used widely including in sectors focused on heavy equipment, automotive design, mining and process manufacturing. Because of its continuous expansion new but also existing markets push the boundaries of the method by asking for simulations in real time. However, due to the discrete nature of the particles, their wide range of sizes and the complexity in their movement, the computational cost is still orders of magnitude too slow. This project focuses on the use of state-of-the-art computational methods to increase the speed of DEM.

Mocean Energy design and build wave energy converters, which convert mechanical wave energy to electrical energy. The company have a numerical model, including an equation of motion, that permits them to estimate the power capture of their device. The nonlinear damping term in the equation of motion is currently determined empirically. Mocean would like to develop a methodology to determine the form and magnitude of this term through a better understanding the underlying dynamical system. In this project, we will investigate if the Sparse Identification of Nonlinear Dynamics (SINDy) algorithm can be used to find the nonlinear damping term through an identification of the underlying nonlinear dynamical system.

COMPLEXICON Ltd. is involved in distribution of vaccine and vaccination know-how to extremely rural areas. This involves driving crates with vaccine doses in vans equipped with refrigiration units to remote population areas, often hundreds of miles from the vaccine distribution centre near the national airport. We seek an optimal (i.e. cost minimal and time-minimal) solution given various constraints on the number of vans, the number of vaccination instructors, the number of drivers and also the cost of petrol.

Low Earth Orbit describes orbits between 160km and 1000km above the Earth's surface. A large number of satellites orbit within this region and despite constant monitoring of orbits and collision avoidance manoeuvres collisions between satellites occasionally take place, for example the 2009 collision between the Iridium-33 and Kosmos-2251 satellites. Repeated collisions may eventually trigger a phenomenon known as the Kessler effect in which so much orbital debris is generated that orbit shells become unusable (as shown in the movie Gravity). A key concern to owners of satellites in Low Earth Orbit is how the risks of collisions will increase by constellations of large number of small satellites e.g. the deployment by SpaceX of 1584 Starlink satellites in a 550km orbit. A key difficulty in estimating this prior to deployment is that the only information available is the number of satellites, the height of the orbit shell, and that the satellites will be evenly spread and have the same orbital inclination. The group is asked to develop models that could be used to estimate the frequency with which satellites from a deployment of this sort might be expected to be involved in collisions or near collisions.

Green roofs also improve air quality since the plants capture carbon and increase oxygen levels. They also provide insulation thus reducing the need for heating and cooling in buildings and so reducing emissions. Importantly they provide a habitat for insects and birds. The problem to be studied during this meeting concerns heat flow and energy storage in various types of substrate, e.g. soil, concrete, asphalt and then look into the effect of adding plants. The goal being to quantify the change a green roof can make to the energy stored (and consequently released) by a single building or a city. Can we advise on optimal forms of green roof and so aid decision makers and town planners? 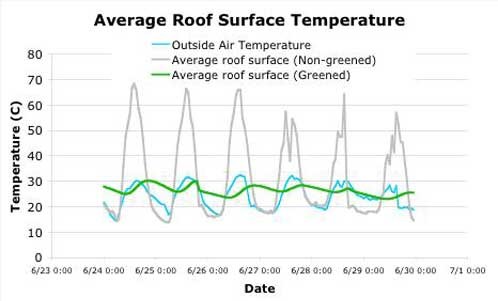 Green roofs also improve air quality since the plants capture carbon and increase oxygen levels. They also provide insulation thus reducing the need for heating and cooling in buildings and so reducing emissions. Importantly they provide a habitat for insects and birds. The problem to be studied during this meeting concerns heat flow and energy storage in various types of substrate, e.g. soil, concrete, asphalt and then look into the effect of adding plants. The goal being to quantify the change a green roof can make to the energy stored (and consequently released) by a single building or a city. Can we advise on optimal forms of green roof and so aid decision makers and town planners?

The provisional programme is detailed below.  All times are in BST.